Carcopter – The concept may have been born from science fiction. But the real-world emergence of the first commercial flying car is far closer to reality than most people think.

Several name-brand automobile manufacturers worldwide have showcased their concepts for more than two decades. Out of them, one promising French company stands poised to emerge as a true first-to-market product leader, set to usher in “a bold new era of propulsion.”

Thierry de Boisvilliers, COO of France-based MACA says that the future is in the air. He is the retired French Attack Helicopter Pilot. He founded it with former Airbus executive Michael Krollak. MACA will introduce S Eleven next month at CES in Las Vegas. S eleven is the smart hybrid of an automobile and a helicopter (carcopter), timed for market delivery by 2023. MACA will showcase their product from Booth #61244 through the magic of Augmented Reality (AR). The event will be in the Eureka Park Marketplace in the Venetian Expo Center.

There are many companies working toward similar solutions all around the world. But, MACA is far ahead of the curve for a variety of reasons, said Boisvilliers. Most companies are still relying on electricity or traditional fossil fuel to power their vehicles. However, MACA deploys clean-burning hydrogen-based fuel cells. This allows for longer flight times and green energy sustainability.  Plus, MACA brings a level of technological innovation that no other flying car developer can possibly deliver. Boisvilliers further said, “While we were incubating the project at Airbus Helicopters for three years, we worked closely in partnership with several Research and Development partners, including the European Union Aviation Safety Agency (EASA), in order to ensure the feasibility of the project.”

Maca’s technology behind the flying car

The carcopter has been crafted on the principles of Speed, Safety, and Sustainability.MACA has integrated racecar technology into the product design of their eVTOL vehicle (Electric Vertical Take-Off and Landing).  As a matter of fact, the company plans to test “fly” its first working model on an actual racetrack by the end of next year.

Thierry de Boisvilliers said “Our AR-based display will provide visitors with the true experience of flight across various environments, will be unveiled next month at our booth at CES,” .  “Our product timing is such that we plan to formally present our S Eleven Flying Car Model as part of the Paris Air Show at Paris-Le Bourget Airport in June 2023.”

In addition to their booth in Eureka Park, MACA will also exhibit at CES Unveiled.  The media-only showcase event will take place Monday, January 3, from 5:00 until 8:30 p.m. in the Shorelines Exhibit Hall at the Mandalay Bay Resort & Casino. 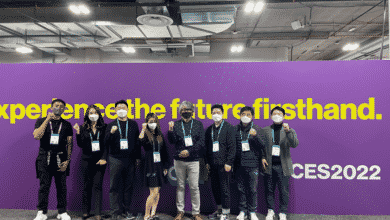